This is adjusted for inflation. It shows the “disruptive technology” that the internet brought about to the mainstream media.

Based on newspaper data released yesterday by the Pew Research Center (“Newspapers: Fact Sheet “) including figures for annual newspaper advertising revenue, I was able to update the chart above through 2015. I’ve featured this chart frequently on  CD  over the last five years, and have referred to the precipitous free fall in newspaper ad revenues since 2000 as one of the most significant Schumpeterian gales of creative destruction in the last decade. After 2013, the  Newspaper Association of America stopped its long tradition of releasing quarterly and annual data on newspaper ad revenue, probably because the declining revenue and circulation numbers kept getting worse and were so embarrassing. Since then it’s been necessary to come up with a proxy to estimate annual percent changes in ad revenue, which Pew Research does by examining revenue data from publicly traded newspaper companies. Based on Pew’s estimates for annual changes, I’m able to estimate annual dollar figures for ad revenue and those numbers appear in the chart above. From the peak of $67 billion in 2000 (in 2015 dollars), US newspaper ad revenue has collapsed by 70% to only about $20 billion last year, about the same as ad revenue in 1950. It took a half century for annual newspaper print ad revenue to gradually increase from $20 billion in 1950 (adjusted for inflation in 2015 dollars) to $67 billion in 2000, and then it took only 15 years to go from $67 billion in ad revenues back to $20 billion in 2015. Expect the free fall to continue…. 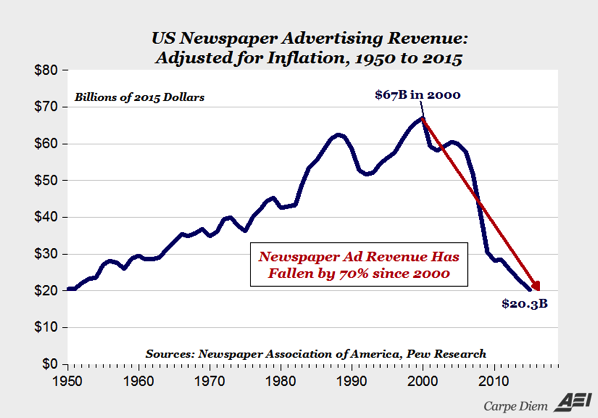