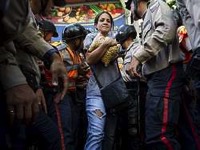 Mass hunger in Venezuela has led to riots, with police arresting a number of people for looting, vandalism, and allegedly organizing the protests. And earlier today, a gunman stormed the Central Bank headquarters in Caracas, reportedly looking for board members and injuring two security officers before being shot and killed.

Venezuela has faced countless shortages created by its centrally-planned economy, and plummeting oil prices have left the government unable to paper over its structural economic problems with more spending. “Between the brutal collapse in goods imports to pay Venezuela’s bond debt and the endless hurdles to private sector food production,” Caracas Chronicles’ Frank Muci explained, “there just aren’t enough of the right calories to go around.“

Under Hugo Chavez, Venezuela became an example for Western leftists of a “progressive alternative to neo-liberalism is both possible and popular.” Rather than pointing to actually-existing socialist states like Venezuela, the democratic socialist in the 2016 presidential race, Vermont Independent-turned-Democrat Sen. Bernie Sanders, preferred to point to countries like Sweden, which haven’t been socialist standard-bearers in a long time. Were Sanders serious about making the U.S. more like Sweden he’d have to, for example, embrace free trade and trade liberalization. Had Venezuela’s government moved away from socialism after Chavez the way Sweden did after the 1970s, it may have spared the country much of the self-imposed economic hardship it faces now.

Asked about food shortages in Sandanista-controlled Nicaragua, of which he was a fan in the 1980s, Sanders argued at the time that bread lines were a “good thing” because it meant people didn’t starve. For leftists who believe words are magical and that the right combination of the right words as law can on their own counteract economic and other realities, the mass hunger in Venezuela might be puzzling. After all, in Venezuela food is a right. The slow-motion catastrophe that has been Venezuela under chavismo illustrates the dangerous misconceptions embedded in the idea of socialism itself.

Socialism considers agents of the state forces of good, who will, because of their benevolent nature, assure an allocation of resources that is “just” and avoids the imposed scarcity of capitalism. But the opposite is true—scarcity has been the norm in the world history, with free markets pulling an unprecedented number of people out of poverty in the last fifty years. Free market capitalism “solved” the scarcity problem by incentivizing innovators to create solutions. Malthusians predicted mass starvation and population decline in the early part of the 20th century. The green revolution in bio-engineered food prevented that. Today, leftists complain about genetically-modified organisms even as GMOS have helped not just feed people who would otherwise be starving, but provided opportunities for employment. Europe’s ban on GMOs, for example, hurts African farmers trying to export their crops the most.