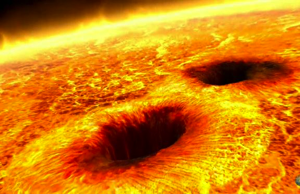 Who would have ever guessed that the sun could affect our weather! </sarcasm>

After quantifying the magnitude and frequency of extreme floods in the UK, scientists found that flooding has been the most extreme in more than 600 years.

Flooding in northwest England was reconstructed from the coarse grained units preserved in lake sediments at Bassenthwaite Lake. The record includes the floods of December 2015 (Storm Desmond) and November 2009.

However, reader J. H. Walker comes to a different conclusion.

Why the interest? “Because rain matters before snow. These weather events are in fact driven by Meridional Jet Stream coupled with the Polar front which is parked over most of the High land of The UK in a North Westerly direction, due to a blocking high over Western Europe.

“Although this is Western Europe it equally applies to the North Western Coast of Canada and Alaska with their South Westerly prevailing winds.”