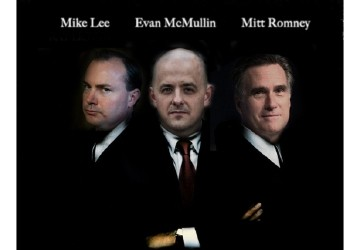 They’re highly organized and extremely motivated. They have biker gangs and deep ties in many neighborhoods. They’re ruthlessly polite and unfailingly nice.

They’re the Mormon mafia, and they’ll stop at nothing to ensure Donald Trump is never president.

That, at least, is what Fox Business anchor and outspoken Trump supporter Lou Dobbs thinks.

With two weeks until the election and independent presidential candidate Evan McMullin running just about even with the Republican nominee according to the most recent polls, Dobbs voiced his frustration on Twitter this past Saturday, calling McMullin, a member of the Church of Jesus Christ of Latter-day Saints, a “globalist, Romney and Mormon Mafia tool.”

Unsurprisingly, other Twitter users found the idea of an organized crime syndicate run out of Utah by Mitt Romney and company to be a little ridiculous and started using the hashtag #MormonMafia to imagine what such an institution would look like.

Via the Idaho Statesman