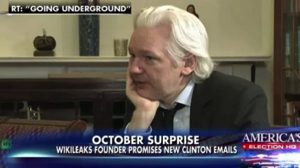 After the first round of leaked emails proved to be of value, outing the DNC’s collusion with Hillary Clinton’s campaign, Julian Assange , founder of Wikileaks, has promised that this next batch will be Clinton’s absolute downfall.

Julian Assange is now saying that his next round of Clinton email leaks will have information that will absolutely destroy her, and it’s not just the email scandal this time. According to Assange, there are more emails his team is in possession of that expose Clinton’s ties to Saudi Arabia and high profile people in Russia.

If released, this could end her campaign in full, well before the election.

Assange has been saying for some time that he has more emails that he will release before Election Day, but in a new interview with RT, he gave some hints at what information those emails might contain.

In particular, Assange mentioned the ties between Clinton and Sauda Arabia.

“Saudi Arabia is probably the largest single donor to the Clinton Foundation, and you can see Clinton’s arms export policies when she was a secretary of state favoring extensively Saudi Arabia,” Assange said

He also suggested Clinton had a reason for attacking rival Donald Trump over his ties to Russia: She has her own ties she’s trying to conceal.