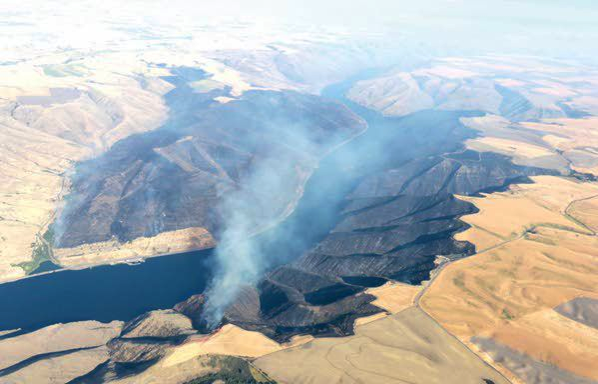 The Snake River Complex Fire was 85 percent contained as of Sunday afternoon after only consuming 90 acres during the weekend.

The fire, which jumped a one-quarter mile section of the Snake River on Tuesday afternoon near Granite Point, had burned a total of 11,452 acres as of Sunday afternoon.

The amount of blackened ground is about equal on each side of the Snake River, which splits Garfield and Whitman counties.

“There’s a lot of black, a lot of cold black,” said Megan Hill, public information officer for the fire. “Every now and then they get a flare up that was hiding under brush. That happened the last night and the night before. They are just looking for hot spots.”

Hill said the fire is being handed over to local agencies.

“Everything is pretty much wrapped up,” she said

A closed section of Wawawai River Road was re-opened 8 p.m. Saturday. No evacuations have been in place since they were lifted Tuesday night, when one structure, a barn, was burned on the Whitman County side of the river. A herd of cows were killed on the Garfield County side the same day.

Seven strike teams and about 200 of the firefighters in the Wawawai Canyon demobilized Sunday morning and were on their way home until a fire started at about 10:45 a.m. near Lyons Ferry in Columbia County.

“The people we sent home were going home and now they are at that Fletcher Road fire,” Hill said.

She said it is possible that fire could have been started by dry lightning.

“It’s nice they were close,” Hill said. “You get seven strike teams right on a fire, that’s good.”