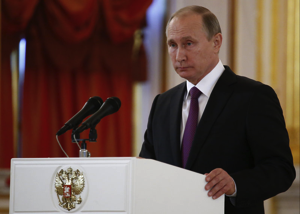 Russian President Putin believes the Trump election could be a new start for US-Russian Relations.

They traded compliments during the campaign. Those comments then became part of the campaign itself. And now that Donald Trump has won the U.S. presidential election, Russian President Vladimir Putin has congratulated him and raised the prospect of a fresh start in U.S.-Russia relations.

In a telegram, the Russian leader said he was confident he and Trump could start “a constructive dialogue based on the principles of equality, mutual respect, and genuine consideration for each other’s positions.” He also expressed the hope that Trump would help resolve “the current crisis” in U.S.-Russian relations.

Russia closely followed the U.S. vote, with overnight coverage on the 24-hour state news channel, including an election map and an electoral vote counter in a corner of the screen. Before commercial breaks, two actors dressed as the Republican and Democratic candidates played out short skits: Trump sneaking a drink from Hillary Clinton’s water bottle, or Clinton coughing in Trump’s face.