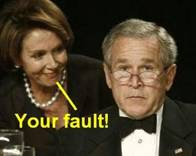 Yes, Obama and Congress added $9 trillion to the budget, but it’s Bush’s fault.

House Minority Leader Nancy Pelosi blamed former President George W. Bush and the Republicans on Friday for the more than $9 trillion that has been added to the national debt under President Obama’s watch.

Pelosi argued that under Obama, the annual budget deficit, which contributes to the national debt, has been reduced dramatically, and said that without Obama’s work, the national debt would be even higher. She also mostly blamed Bush for not paying for the wars in Afghanistan and Iraq.

“When President Obama stood on the steps on the Capitol eight years from next week, the [budget] deficit was $1.4 trillion — one year deficit,” she said. “It’s reduced by 70 percent in his administration. Much of the increase in the national debt that has occurred from this time still springs from two unpaid-for wars, cost that we owe our veterans following that, giveaways that they gave to the pharmaceutical industry, and the high-end tax cuts that have carried forward without any job production. Absent the work of President Obama, this national debt would be even higher.”