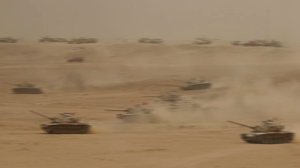 A bipartisan group of Senators is moving to block the $1.15 billion sale of US tanks to Saudi Arabia, citing concerns over human rights and the Saudi-led war in Yemen. Riyadh has requested new tanks to modernize its arsenal and replace battlefield losses.

Last week, the US Defense Security Cooperation Agency published the approval for the sale of 153 tanks and 20 tank recovery vehicles to Saudi Arabia, calling the kingdom “a strategic regional partner which has been and continues to be a leading contributor of political stability and economic progress in the Middle East.”

Congress has the right to block any such transaction within 30 days of the announcement, but it seldom does so. This time, however, some senators say they will push for a vote.

“I will work with a bipartisan coalition to explore forcing a vote on blocking this sale,” Senator Rand Paul, a Kentucky Republican, told Foreign Policy last week. “Saudi Arabia is an unreliable ally with a poor human rights record. We should not rush to sell them advanced arms and promote an arms race in the Middle East.”

Paul’s most likely ally on the Foreign Relations Committee is Sen. Chris Murphy (D-Connecticut), who also sits on the Middle East and South Asia subcommittee. Both senators have been outspoken critics of the US support to the Saudi-led war in Yemen. According to UN estimates, at least 6,000 people have been killed and 2.8 million have been displaced since the Saudi intervention began in March 2015.

“If you talk to Yemeni Americans, they will tell you in Yemen this isn’t a Saudi bombing campaign, it’s a US bombing campaign,” Murphy said on the Senate floor in June, according to Defense News. “Every single civilian death inside Yemen is attributable to the United States. We accept that as a consequence of our participation.”

The Saudi-led coalition resumed airstrikes in Yemen last week, ending a truce brokered in April. Riyadh is backing the ousted President Abd Rabbuh Mansur Hadi against the Houthi insurgents. Saudi Arabia claims that the Houthis – who are Shia Muslims – are proxies of Iran, which Tehran has categorically denied.