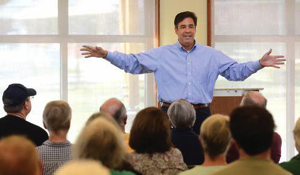 The 14th Amendment does say that “all persons born or naturalized in the United States, and subject to the jurisdiction thereof, are citizens.” Some legal scholars, though, question whether illegal immigrants – and by extension their children – are actually subject to U.S. jurisdiction.

This debate over “birthright citizenship” has taken on new impetus in recent months, given the anti-immigration rhetoric Republican presidential nominee Donald Trump has used throughout his campaign. As recently as Wednesday, for example, Trump once again vowed to build a wall along the Mexican border and deport millions of illegal immigrants.

Labrador, who worked as an immigration attorney prior to being elected to Congress in 2010, discussed his views on immigration and the issue of birthright citizenship during a town hall meeting Thursday in Moscow.

“If it (birthright citizenship) can only be changed constitutionally, then I wouldn’t want to change it,” he said. “If we change it through statute, maybe we could include it in any immigration reform. Congress decides naturalization laws, and we’ve allowed anyone born here to become citizens – but can we change that? I’m not sure. I’m still researching that.”

Overall, Labrador agrees with Ronald Reagan’s “City on a Hill” view of immigration, where any wall around the city has a gate through which immigrants can enter legally.

“I believe we do need a (legal) wall,” Labrador said. “We can’t just let in everyone who’s poor or who needs a job. But we also need a gate to bring in the people we need.”

He supports modernizing the U.S. visa system to focus less on family ties and more on providing entry for agricultural workers and others who have the job skills American businesses need. He also wants to emphasize enforcement first, before deciding what to do with the 12 million or so illegal immigrants who are already in the country.

More than 40 percent of those 12 million immigrants entered the U.S. legally, Labrador said. Beefing up efforts to prevent them from overstaying their visas is a better approach than deporting someone after they’ve been here for years.

About 60 people attended the Moscow meeting. Other issues that were discussed include:

Idaho, for example, has single-issue language in its Constitution, which prohibits lawmakers from considering measures that combine multiple subjects in a single bill.

“I hate those bills,” Labrador said. “They usually have two or three things I like, along with about 40 or 50 things I disagree with. If we had single-issue legislation, it wouldn’t matter how long someone had served in Congress because we’d have to do our job issue by issue. You couldn’t hide your vote.”

“I don’t believe health care is a right,” he said. “I think our job as legislators is to make sure costs are as low as possible, so people can access (services) on their own.”

“Every time we turn something over to the government, costs go up,” Labrador said. “We need to figure out, as a society, how to bring costs down.”

Labrador began the meeting by noting that, while constituents may disagree with his policy positions, helping them address whatever problems they’re having with various federal agencies is something he and his staff take very seriously – regardless of whether someone voted for him or not.

“The most important thing our office does is provide service to constituents,” he said. “We can’t always help, but I promise you we’ll go above and beyond.”