This isn’t going to sit well with the statists. 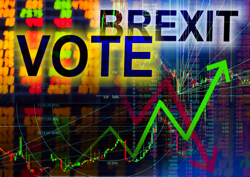 Remember when the world’s leading economist, the IMF, and Central Bankers all predicted that if Great Britain pulled out of the European Union chaos who follow?

They assured everyone that Brexit would be a disaster, not only for the UK but the rest of the world.

Former Prime Minister David Cameron, who stepped down after the vote, even told British voters that an economic ripple effect would threaten their government pensions.

And President Obama, who never misses an opportunity to interject himself in others business, warned Britons that they would have to “go to the back of the queue” when it came to trade with the U.S.  Another red-line in the sand for a short-eyed man!

But those who love their freedom didn’t buy the doomsday chicken little predictions.  On voting day, Brexit passed.

But then something strange happened.  With the decrease in the British pound, people worldwide saw it as an excellent opportunity to vacation in England.