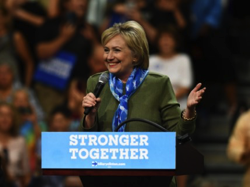 Today, right before Labor Day weekend, the FBI dumped some heavily redacted summary files of its interview and investigation of the private email and communication systems set up by Hillary Clinton when she was secretary of state.

Hey, at least they released the information early enough so that journalists can search through it before dumping their findings onto a populace that is currently stuck in traffic.

Here’s a very quick summary from the Washington Post:

The documents, which total 58 pages, do not seem to provide any major revelations about Clinton’s actions — though they paint her and her staff as either unaware of or unconcerned with State Department policies on email use. The materials also show that the FBI was unable to track down all of Clinton’s devices, including phones, it sought, and that made it impossible for agents to definitively answer every question they had, including whether Clinton’s emails were hacked.

“The FBI’s investigation and forensic analysis did not find evidence confirming that Clinton’s e-mail accounts or mobile devices were compromised by cyber means,” the author of the report wrote. “However, investigative limitations, including the FBI’s inability to obtain all mobile devices and various computer components associated with Clinton’s personal e-mail systems, prevented the FBI from conclusively determining whether the classified information transmitted and stored on Clinton’s personal server systems was compromised via cyber intrusion or other means.”

When they say “all her devices,” they’re talking about 13 different mobile devices and 5 tablets, most of which were never found or turned over to the FBI for inspection. That information has been raising a lot of eyebrows, given how Clinton’s defense of her secretive and private email and communication methods was because she wanted to handle it all from one device for ease. Maybe she meant only one device at a time? (Update: Also, a laptop used to archive Clinton’s emails is missing.)