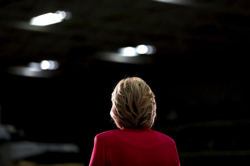 Though the FBI found no evidence that Hillary Clinton’s emails was compromised, an unnamed staffer working for her husband was hacked in early 2013.

SINCE IT CAME to light that Hillary Clinton ran a private email server during her time as Secretary of State, that computer’s security has become a subject of controversy among politicos whose only notion of a “server” until recently was a waiter carrying canapés at a fundraising dinner. But now the FBI has released the first hint that Clinton’s private server may have been compromised by hackers, albeit only to access the email of one of former president Bill Clinton’s staffers. And though there’s no evidence the breach went further, it’s sure to offer new fodder to critics of Clinton’s handling of classified data.

On Friday afternoon, the FBI released a new set of documents from its now-concluded investigation into Clinton’s private email server controversy. The 60-page report includes a description of what sounds like an actual hacker compromise of one of Bill Clinton’s staffers. It describes that in early January 2013, someone accessed the email account of one of his female employees, whose name is redacted from the report. The unnamed hacker apparently used the anonymity software Tor to browse through this staffer’s messages and attachments. The FBI wasn’t able to determine how the hacker would have obtained the her username and password to access her account, which was also hosted on the same private server used by then-Secretary of State Clinton.

“The FBI’s review of available…web logs showed scanning attempts from external IP addresses over the course of [IT manager Bryan] Pagliano’s administration of the server, only one appears to have resulted in a successful compromise of an email account on the server,” the report reads. “Three IP addresses matching known Tor exit nodes were observed accessing an e-mail account on the Pagliano Server believed to belong to President Clinton staffer [redacted].”