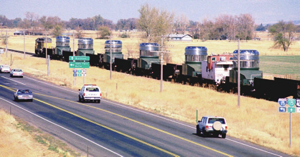 The US Navy has a spent reactor fuel core facility at NRF (Naval Reactors Facility) near Idaho Falls (part of INF).

I’m guessing that they are talking about building something new out there.

I was responsible for getting the nuclear reactor on my first submarine removed and shipped to NRF during a nuclear refueling overhaul.

The Navy and U.S. Department of Energy want to build a $1.6 billion facility at a nuclear site in eastern Idaho that would handle fuel waste from the nation’s fleet of nuclear-powered warships through at least 2060.

The government also considered using two other existing facilities at the site that are outdated or overhauling them. Officials concluded that the effect to the environment would be small for all three options.

Officials say a new facility to handle the spent fuel from warships is the strategy that would best allow the Navy to continue its mission.

Via The Associated Press