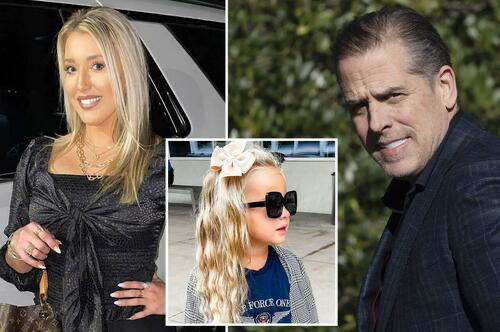 I really don’t see how Hunter can do this.

First, anyone can change their name to anything they like. It’s not like he can prevent that.

Second, she is his daughter. The mandated DNA paternatiy test proved that. He may disinherit her, but he cannot say she’s not his daughter.

In Oscar Wilde’s “The Importance of Being Ernest,” the main character’s search for his true name comes to a head when he finally demands “would you kindly inform me who I am?” In an astonishing filing this week, Hunter Biden answered that question for his four-year-old daughter Navy Joan and effectively declared “you are no Biden.”

Hunter Biden’s disgraceful treatment of his daughter has long been on display in Arkansas where he long denied being her father, fought paternity, and wasthreatened with contempt of court over his failure to supply needed documents. After DNA testing was forced by a court, Hunter was found to be the father but he continued to resist efforts to force him to pay child support and supply financial records.

Recently, Lunden Roberts sought to have a surname change for her daughter to Biden. Even after his long and abusive treatment of his daughter in court, Hunter Biden’s opposition is breathtaking. He opposes his daughter using his name and says that, if she does, she will never have a “peaceful existence.”

Of course, Biden did not feel that way with his other four children. They are all true Bidens and living peaceful existences. It is only Navy Joan who he does not want to bear the family name.

Hunter’s concern for Navy Joan’s peaceful existence is a bit odd since he has reportedly never even seen his daughter after fighting for years to deny his paternal status and child support.

While living in a luxurious mansion in Malibu, Hunter continued to fight his obligations under child support and requested in September 2022 to have the payments lowered, bemoaning how his “financial circumstances” were difficult for him. The public pays more for his security in his mansion than he does in monthly support for his daughter.

Hunter is asking Circuit Court Judge Holly Meyer to deny Navy Joan the ability to use her father’s surname and claiming that it is in her best interest. The filing is so self-serving and transparently dishonest that it does what was once thought impossible: reach a new low for Hunter. All of his reported selfies having sex and doing drugs with prostitutes were shocking. His attacks on his former sister-in-law, Hallie Biden, widow of the deceased brother (with whom Hunter later had a romantic relationship), were appalling. However, the craven effort to deny this child his name reaches a level of cad that stands unrivaled.

The position of Hunter in court has been disgraceful, but the media has largely ignored the matter. It has also ignored the utter lack of support from President Joe Biden and the First Lady, who tellingly omitted a stocking for Navy Joan as one of their grandchildren. (The dog and cat did receive stockings). There is no record that Joe or Jill Biden have ever sought to meet, let alone embrace, their grandchild. The President has, however, sought to deny the child security protection (despite his son’s concern for her “peaceful existence”).

Joe Biden has long campaigned against “deadbeat Dads” but when a Fox reporter asked about Hunter’s refusal to pay child support, President Biden snapped at him and refused to answer the question on the “personal matter.” (The media also ignored Hunter’s deadbeat dad record in fawning interviewsabout this “bravery” in writing a book on his life).