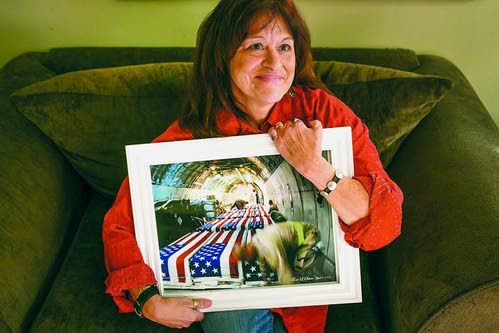 More than a dozen years ago, Tami Silicio, a native of Edmonds, Wash., took a photo of the tunnel-like interior of a cargo plane that held more than 20 flag-draped coffins of U.S. service members killed in Iraq and soon to be flown home.

First published by The Seattle Times, the image quickly gained a global audience, and helped to fuel a volatile debate about a U.S. government policy that prohibited the media from taking pictures of such scenes.

It also cost Silicio her job in Kuwait with a military contractor, The Seattle Times reported.

In October, the 2004 picture was included in a Time anthology book, “100 Photographs: The Most Influential Images of All Time,” and will be part of a companion digital display scheduled for rollout later this fall.

Though the picture would become a rallying point for those opposed to U.S. policy in Iraq, Silicio said that, at the time, she did not intend an anti-war image. The aircraft interior felt almost like a shrine, she said, and she hoped the photo would convey the respect and the dignity with which the workers went about their tasks.

“I feel honored,” Silicio said. “The photo was honest. It captured the respect for the dead and that’s what it should have been about. That photo stirred up a whole lot of stuff around this nation. People’s emotions were touched.”