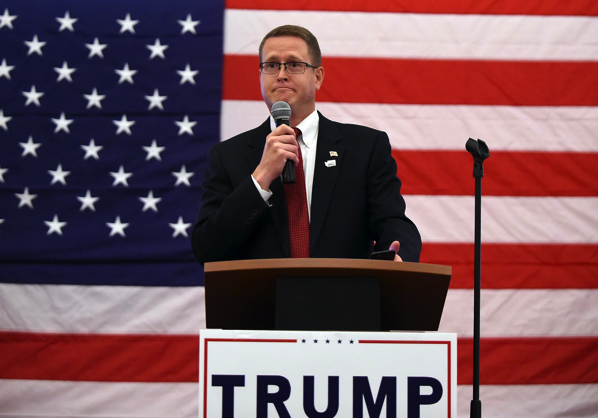 One of the oldest ideas conceived by conservative Eastern Washington legislators to tweak their more liberal counterparts is getting some extra attention this week.

Spokane Valley Reps. Matt Shea and Bob McCaslin, along with fellow Republican Rep. David Taylor of Moxee, have proposed splitting Washington in two and renaming the eastern half Liberty.

That doesn’t mean the proposal, which is among a few dozen legislative ideas prefiled this week for the upcoming session, isn’t getting under the skin of some opponents. After hearing reports of the proposal to have the Legislature ask incoming President Donald Trump and Congress to create a new state for Eastern Washington, Spokane City Council President Ben Stuckart fumed via news release, “It’s like literally standing up and saying Eastern Washington needs to shoot itself in the foot.”

The Legislature can’t split the state in half by itself. A proposal like HJM 4000 is a way to formally ask the president and Congress to do something, but whether they would do it is up to them. Congress hasn’t created a new state out of an existing state since the Civil War, when West Virginia wanted to stay with the Union and was carved out of Virginia, which had seceded. Other states, including California and Texas, also have movements from time to time to split themselves up. Check the map; they’re still intact.

HJM 4000 is like most of the previous proposals as far as the new state’s boundaries, splitting Washington along the crest of the Cascade Range.

Most previous efforts left the name of the proposed new state up to the imagination of Congress, although a few have suggested Lincoln, Jefferson or Madison.

Legislative proposals to “split the state at the Cascades” date back to at least 1915, when Sen. Richard Hutchinson, another Spokane Republican, introduced a joint memorial. News accounts at the time said the idea was about a half century old, although whether it got as far as a formal joint memorial isn’t clear from those reports.

Via the Spokesman Review