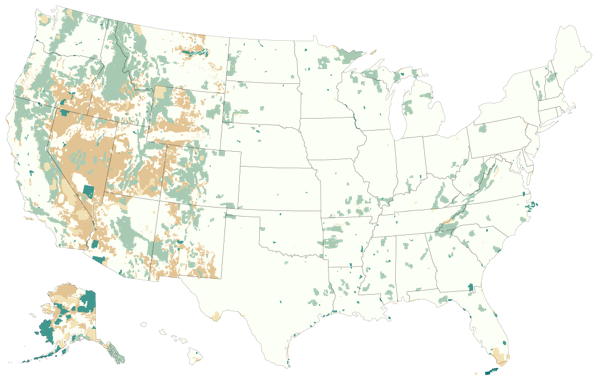 The United States government owns 47% of all land in the West. In some states, including Oregon, Utah and Nevada, the majority of land is owned by the federal government.

Idaho’s Congressman Raul Labrador asks for 2% back, and the Dems go hermantile.An Eye on Boise at the Spokesman Review :

Revenues from timber harvests or other activities would pay for project operating costs; Labrador also submitted an amendment Wednesday to clarify that any profits would be split between the U.S. treasury and counties where the projects are located, with counties receiving 75 percent and the federal government getting the remainder. Each state could select a minimum of 200,000 acres for a pilot project; states that have at least 5 million acres of national forest land could select as many as 900,000 acres. An advisory committee appointed by the governor would be responsible for picking the land; wilderness areas and national monuments would be exempt from selection. You can read Spence’s full report here, including the back-and-forth between Labrador and Democratic critics of his bill.

The bill previously passed the House in 2013, but was not considered in the Senate, Spence reports.