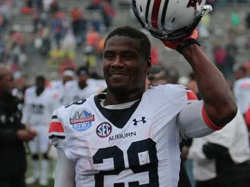 Auburn University dismissed running back Jovon Robinson—formerly the No. 1 junior college player in the country—after a female student accused him of assaulting her.

“He did not meet my expectations of what it takes to be an Auburn Tiger football player,” said head coach Guz Malzahn, according to al.com.

But Robinson never assaulted anyone. His purported victim made it up entirely. The woman now readily admits to fabricating the allegation out of spite—she was angry at Robinson for making her leave his room.

It’s an astonishing, malicious lie that might have factored into Auburn’s decision to release Robinson, though the university maintains that it had other issues with him. It’s also a powerful repudiation of the leftist-feminist idea that victims of assault and sexual assault deserve to be automatically believed.

According to al.com—which obtained an exclusive interview with the woman—the pair had an argument very early in the morning on July 15. Robinson wanted her to leave, and eventually escorted her out of his room. He didn’t hurt her at all.

At roughly 6:00 a.m., the woman sent an email to Coach Malzahn to make him aware that Robinson had abused her. She said that Robinson caused her to smash her head into the door and bloody her knees. She wrote in the email:

Although I have every reason to, I chose to not get the law involved; as I know how nasty things could get; especially for someone in his position. Therefore, I am trying to keep the situation as private as possible. With this being the second or third time an incident of this sort has happened with him, I believe that it is time he be held responsible for the way he has been acting toward not just me, but women in general. Although were [sic] are very close, as I said before, I will make sure to stay away from and not contact him.”