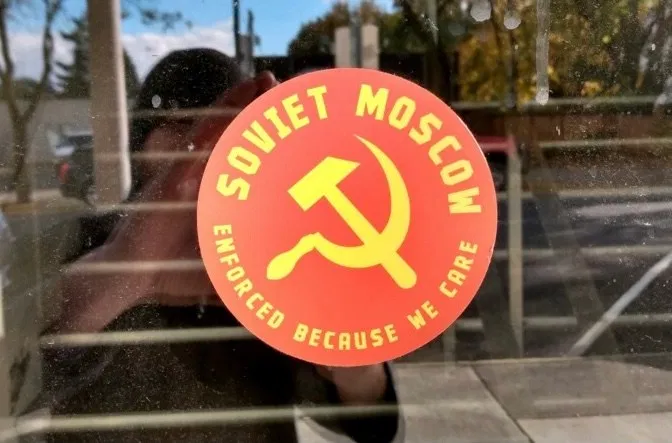 This is well worth the read.

Moscow, Idaho–“I knew our justice system had gone wobbly, but if this kind of political prosecutorial harassment can happen in Idaho over something as trivial as stickers, God help anybody dealing with serious issues,” Nate Wilson said.

Wilson’s two teenage sons (now 19 and 14) are ten months into their prosecution by the City of Moscow and Latah County for posting non-damaging stickers on poles without permission in downtown Moscow. Wilson himself is being prosecuted as an accessory.

City of Moscow, Latah County Prosecutors, and MPD seem to have taken several missteps in the prosecution.

City Attorney, Elizabeth Warner, originally charged the Wilsons with 13 misdemeanors each. But after the story made headlines, charges have been reduced to a single misdemeanor count each. For the adults, a single misdemeanor still carries a maximum sentence of six months in prison and creates a permanent criminal record. The sticker incident happened back in October of 2020.

The charges are based on city ordinance, Title 10 Section 1-22 which prohibits the posting of any, “notice, sign, announcement, or other advertising matter” on fences, buildings, or poles.

In Moscow history, the city has never issued a single citation or prosecuted anyone based on this ordinance, although yard sale signs, stickers, and “advertising matter” are regularly posted on poles throughout the city as a routine mode of public communication.

Rory Wilson, 19, who was a recent member of Bill Lambert’s “Mayoral Youth Council”, and his younger brother, 14, were stopped by Moscow Police after they had received a report that someone was posting stickers on poles around downtown Moscow. The stickers bore a hammer and sickle and read, “Soviet Moscow – Enforced Because We Care.” The stickers were created as a political protest of the now infamous and illegal arrests that MPD made at a peaceful psalm sing outside City Hall in Sept. 2020.