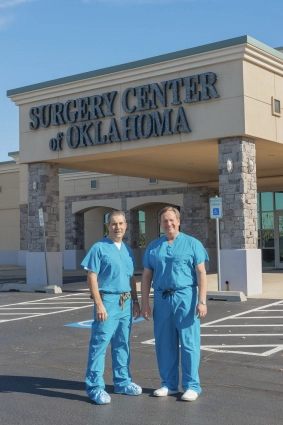 When Art Villa found out, after one too many boating accidents, that he needed a total knee replacement, he began asking around to see how much it would cost. The hospital near his home in Helena, Mont., would charge $40,000 for the procedure, he says. But that didn’t include the anesthesiologist’s fee, physical therapy or a stay at a rehabilitation center afterward. A 2015 Blue Cross Blue Shield study found that one hospital in Dallas billed $16,772 for a knee replacement while another in the same area charged $61,585.

It was in the midst of this confounding research that Villa, who’s 68, heard about the Surgery Center of Oklahoma, whose business model is different from that of most hospitals. There, the all-inclusive price for every operation is listed on the website. A rotator-cuff repair for the shoulder costs $8,260. A surgical procedure for carpal tunnel syndrome is $2,750. Setting and casting a basic broken leg: $1,925.

The catch is that the whole facility is cash-based. It doesn’t take insurance of any kind. Not Aetna. Not Cigna. Not Medicare or Medicaid. Patients or their employers pay whatever price is listed online, period. There are no negotiated rates, no third-party reimbursements and almost no paperwork. “We say, ‘Here’s the price. Here’s what you’re getting. Here’s your bill,'” says Keith Smith, who co-founded the Surgery Center in 1997 with fellow anesthesiologist Steven Lantier. “It’s as simple as that.”

To Villa, the model seemed refreshingly subversive. The Surgery Center would charge $19,000 for his whole-knee replacement, a discount of nearly 50% on what Villa expected to be charged at his local hospital. And that price would include everything from airfare to the organization’s only facility, in Oklahoma City, to medications and physical therapy. If unforeseen complications arose during or after the procedure, the Surgery Center would cover those costs. Villa wouldn’t see another bill.

Sometimes called direct pay, and closely related to concierge care, this sort of business model was once seen as the perquisite of rich folks and medical tourists from foreign lands. But nowadays many of the people seeking cash-based care are middle-class Americans with high-deductible insurance plans. For a patient with an $11,000 family deductible, for example, it might make more sense to seek out a cash-based center like the Premier Medical Imaging facility in Minneapolis, which offers a basic MRI for $499, than to cough up the several thousand dollars that the same procedure generally costs at a traditional hospital. Cash payments don’t count toward a patient’s deductible, but for some it’s worth the gamble.