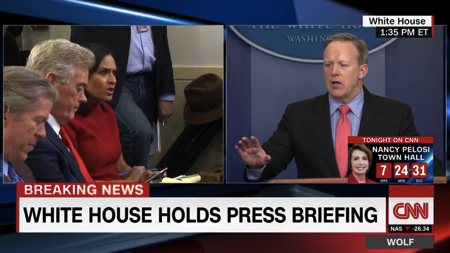 During Tuesday’s briefing, White House press secretary Sean Spicer was pressed by a reporter to call the executive order a travel “ban,” as President Donald Trump had in a tweet.

Spicer argued that the President was simply using the language exercised by the media and that Trump “has been very clear that it is extreme vetting.”

“He says it’s a ban,” a reporter told Spicer.

“He’s using the words that the media’s using,” Spicer replied.

“Those are his words!” the reporter shouted.

“It can’t be a ban if you’re letting 1 million in,” said Spicer. “That is by nature not a ban. It is extreme vetting.”

“But the President himself called it a ban,” the reporter insisted. “Is he confused or are you confused?”

“No I’m not confused,” said Spicer. “I think the words that are being used to describe it are derived from what the media has been calling this. He has been very clear that it is extreme vetting.”

Check out the fiery exchange below.

White House press secretary insists travel ban is not a ban despite the President’s tweet calling it one https://t.co/RPlwnRpVvF https://t.co/n8qT5MqHFy