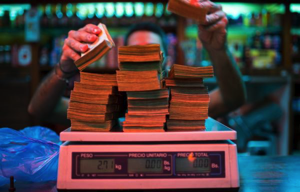 Hyperinflation has gotten so out of control in Venezuela that people have started to weigh money as it is easier than counting it.

This is Democratic Socialism at its finest.

Having thrown in the towel on hyperinflation by printing banknotes with 200-times-higher denominations, Bloomberg reports that things in Venezuela have continued to get worse with the currency now so devalued (with even simple purchases requiring so many bills) that instead of counting bills, they are weighing them.

Once one of the world’s strongest currencies, the bolivar has been reduced to a nuisance. Basic purchases require hundreds of bills. Shoppers shove piles of them into gym bags before venturing into crime-plagued streets and shopkeepers stash thousands in boxes and overflowing drawers. In the absence of official data, economists are left to guess what the inflation rate is. Estimates for this year range from 200 percent to 1,500 percent.

At a delicatessen counter in eastern Caracas, Humberto Gonzalez removes slices of salty white cheese from his scale and replaces them with a stack of bolivar notes handed over by his customer.

“It’s sad,” Gonzalez says. “At this point, I think the cheese is worth more.”