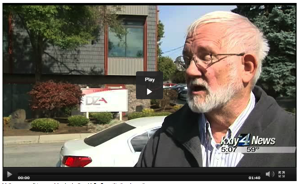 The citizens of Spokane Valley think they are being “conservative”? They either don’t know (or forget) that the US Constitution only applies to the federal government. It’s non-applicable (as originally written) to the states, counties, or cities. They are being un-conservative in this move. Via KXLY:

The Spokane Valley City Council has taken a decidedly hard right turn politically, and a proposal its now considering would take that stance even further.

The council will consider a man’s request to refuse to enforce any law they deem to be unconstitutional.

Spokane Valley resident Terry Gaston believes the U.S. Constitution should be included in the oaths of office taken by the mayor, police chief, and other city officials.

Speaking at this week’s city council meeting, Gaston said by changing the oath, city officials could then refuse to enforce any law that they believe is unconstitutional, even if that law is upheld by the courts.

Councilman Ed Pace says he supports making such a change, and believes it would likely be approved by the current city council, which has seen a dramatic political shift to the right over the past year.

Pace says city officials could have to take some legal risk in order to uphold the constitution.

“One way of course is for them personally to violate the law as a test case, get themselves arrested, hire lawyers, get lawyers, challenge themselves in the court, that’s the way our three branch government is set up,” said Pace.

Pace said the city attorney will have to research the legal implications of such a change, and then it would be put on the agenda of a future council meeting.