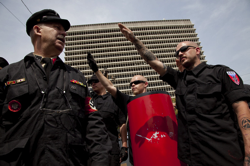 Twitter’s previous laissez-faire policy of letting free speech reign on the social network earned ire for their failure to curb hate speech and harassment. But letting terrorist groups freely use it to gather followers and spread their messages was too much. After vowing to ban accounts linked to extremism in mid-2015, they proceeded to shut down over 360,000 of them. But according to a report, Twitter is focusing on countering ISIS-promoting tweets while letting white nationalists run rampant on the service. Which is worrying, since Americans have committed 80 percent of terrorist attacks in the US since September 11th, 2001.

At the end of the day, ISIS supporters seem to be under far more scrutiny than white nationalists on Twitter, according to the report by J.M. Berger of George Washington University. While Twitter continues scrubbing Islamic extremist material off its network, followers of the major white nationalist movement have risen 600 percent since 2012, from just over 3500 accounts to beyond 25,000. Whether Twitter’s policies significantly curb extremist recruiters — which the UK Parliament doesn’t believe — the report insists that other groups have learned from ISIS’ tactics both on and offline, including how to promote their messages and secure a following.

Users are reporting Islamic extremist content more than white nationalist activity, according to the report, and the social network is spending more effort quashing the former. During the data collection period between April and August 23rd, 2016, only 288 white nationalist accounts of the 4,000 Berger examined had been suspended — and that’s only after the social network instituted more procedures for reporting abuse. In that time, 1,100 ISIS supporters were temporarily banned.

The comparative leniency exists despite far more frequent activity from white nationalists and Nazis, which Berger tracked separately. Those two groups had more followers overall and tweeted more frequently than those for the Islamic State, while the latter only came out on top with better consistency in hashtag use, reflecting their far more disciplined social media strategy. The poorer performance of ISIS-linked content and accounts is partly due to Twitter’s aggressive suspension campaign, and extremist network’s metrics have nosedived accordingly since 2015.

It’s possible that Islamic extremist recruiting is more visible and reported because it follows a rigidly programmatic model. First, supporters promote educational material, the ISIS social network flocks around would-be recruits and isolates from their pre-existing communities before urging them to commit terrorist acts. In contrast, white nationalists are split by factions without a dominant institution or guiding authority, making their actions and recruitment appear more like those by grassroots activists.

It also doesn’t help that some white nationalist or Nazi-supporting content is spewed by trolls hoping to rile up sensitive tweeters, disguising actual supremacist outreach. But bonding over negative reactions toward minority inclusion and cultural change is part of their recruitment strategy, according to the report. This is in stark contrast to the ISIS playbook, which has supporters surround potential recruits as a community that expresses positive, warm opinions of the extremist group.

If there’s any silver lining, it’s that white nationalists haven’t really monetized their fanbase, the report said. For all their success compared to supporters of the Islamic State, white nationalists haven’t been able to move past social support into securing material support from their new recruits. This is partially due to how fragmented and factionalized the movement is: When trying to stage rallies last spring, barely a handful of people showed up at about a dozen locations, according to the report.