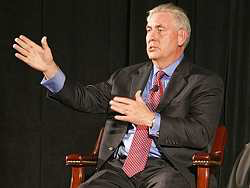 President-Elect Donald Trump announced this morning on Twitter that he intended to nominate Exxon-Mobil CEO Rex Tillerson for the position of secretary of state, calling him “one of the truly great business leaders of the world.”

Tillerson has been the CEO of Exxon-Mobil since 2006, and has been with Exxon-Mobil for 41 years, joining as a production engineer. He was expected to retire from the company by March.

Tillerson has often spoke about technological progress bringing the U.S. closer to an era of energy abundance. “We face an urgent need to learn the appropriate policy lessons to fully leverage this historic moment,” he said in public remarks in 2014. “We need new policies designed for this new era of abundance not policies based on the fear of scarcity.”

In 2012, Tillerson spoke to the Council on Foreign Relations, where he noted the that while energy independence and energy security were used interchangeably in political disucssions, they meant different things. “I think what the U.S. policy and what’s in the best interest of American consumers has been and should be—is securing access to energy in a reliable, relatively affordable way,” he explained. “And if we’re able to do that, where it comes from should be of little consequence to us, if it’s reliable, if I have a system of policies that ensure I have reliable, affordable sources of energy.”

Tillerson added: “If you don’t like the people you’re buying it from, that’s a different issue. That’s a different issue.” Tillerson has had significant experience on that front, dealing with all kinds of foreign regimes that control access to resources in their countries. Exxon-Mobil has been in a years-long legal battle with Venezuela over its nationalization of oil resources and the status of contracts that pre-dated the Hugo Chavez regime.

In 1998, Tillerson became responsible for Exxon-Mobil’s holdings in Russia, subsequently entering the company into agreements with Russia’s state-owned oil company, Rosneft. In 2013, he was awarded the Order of Friendship, a decoration bestowed by the Russian government on foreigners it finds have worked to improve relations between their countries and Russia, for Exxon-Mobil’s contribution to “developing cooperation in the energy sector.”

Exxon-Mobil continued to work in Russia despite sanctions imposed in 2014 in response to Russian aggression in eastern Ukraine and its annexation of Crimea. “Today, commercial success is driven by efficient international cooperation,” Putin told the CEO of Rosneft and to ExxonMobil’s lead manager in Russia duringa video conference call. “Businesses, including Russian and foreign companies, perfectly realize that and despite certain current political difficulties, pragmatism and common sense prevail, and we are pleased to hear that.”