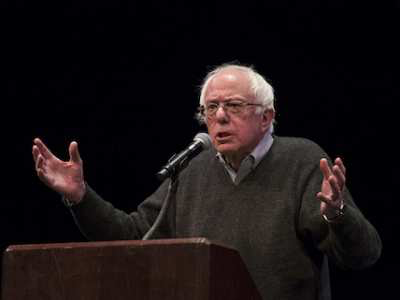 Sen. Bernie Sanders understands something that mainstream liberals do not: Donald Trump won the presidency in part because he channeled populist resentment toward political correctness into a winning issue.

During a fascinating and free-wheeling town hall-style event on Chris Hayes’ show on MSNBC Monday night, Sanders was explicit: Trump’s criticisms of political correctness spoke to the American people’s legitimate fury toward a political class and media regime that is overly-scripted and beholden to the powerful.

“[Trump] said he will not be politically correct,” said Sanders. “I think he said some outrageous and painful things, but I think people are tired of the same old politically correct rhetoric. I think some people believe he was speaking from his heart and willing to take on everybody.”

Hayes then asked what political correctness means to Sanders. He responded:

“What it means is you have a set of talking points which have been poll-tested and focus-group-tested and that’s what you say rather than what’s really going on. And often what you are not allowed to say are things which offend very powerful people. For years and years we have been told by Republicans and many Democrats that our trade policy was a great idea, that it was working for America. The American people don’t believe it. The American people I think want candidates and politicians to have the guts to stand up to the billionaire class and start representing the middle class and working families of America. I don’t think it’s more complicated than that.”

“[Trump] was going after these consensus things but he was always saying things frankly that when we talk about political correctness are basically just rules about not being a jerk,” said Hayes. “He’s violating taboos that a lot of people think we should keep.”

But Sanders hit back. “He was talking about the media,” said Sanders. “Do people here think the media reflects the reality of American society?”

The audience, needless to say, was none too pleased with the media.

“One of the arguments as to why Trump won,” Sanders continued, “is the belief that most or many of his supporters are sexists or racists or homophobes. I happen not to believe that’s the case. I think what he did do is he said, ‘You know what, there’s a lot of pain in this country, people are scared and people are worried.’ People are tired of status quo politics. He broke through that.”

Another round of Democratic Party operatives and pro-Clinton hacks will probably label Sanders a white supremacist for making these comments. And that’s why they lost.

Defenders of liberal values have to find a better way to talk to Trump supporters: belittling them (even when they deserve it) hasn’t worked, and won’t.