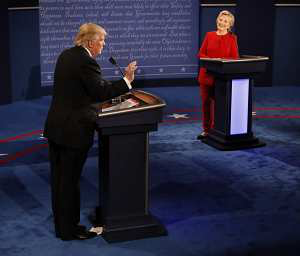 Government suspicion is a dangerous precedent for denying constitutional rights. And so is incorrectly getting your name on a No Fly list that you cannot get off of. It’s like a Hotel California run by the TSA.

Tonight’s first debate between Donald Trump and Hillary Clinton was a massive reminder that they’re both on the same page on some of the worst policies. In the law-and-order section arguing over policies on fighting crime, Hillary Clinton declared her support for denying citizens their Second Amendment right to purchase arms if they are placed on government “watchlists” for being suspected of crimes or involvement in terrorism.

Not charged. Not arrested. Merely placed on lists. Unfortunately, Donald Trump declared his agreement with Clinton. Neither of them seem to hold either the Second Amendment, enshrining the right to bear arms, or the Fifth Amendment, requiring due process before taking away those gun rights.

This isn’t new, unfortunately. When Democrats raised the idea of using federal government watchlists to deny people the right to own guns, it drew the attention of many conservatives and libertarians. And it created a new push to take a closer look at how these watchlists and no-fly lists actually worked. The opaque and bureaucratic system has previously been operating with very little oversight. If you ended up on a watchlist, the “due process” involved was to send a letter to the government begging to be removed from the list and trying to prove that there’s no reason to be suspected of any criminal activity.

The utter lack of actual due process in the system prompted a lawsuit from the American Civil Liberties Union (ACLU) representing several people on no-fly lists, and they (and the experiences of a scholar who was put on the no-fly list due to a clerical error) have prompted the government to provide a small measure of transparency. But it’s not nearly enough, and the ACLU is continuing to fight to add some real due process for people placed on the list.

The ACLU submitted a letter opposing a failed Congressional attempt to craft a law blocking gun ownership from those on watchlists. Clinton’s response makes it clear that she will want to see it return if she is elected president. Unfortunately, it looks like Trump has the same idea.