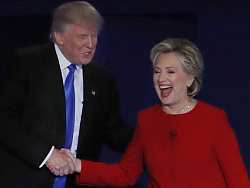 Hillary Clinton argued at tonight’s presidential debate that the decision to end the war in Iraq and completely withdraw U.S. troops from the country was made by George W. Bush, and not Barack Obama, in response to Donald Trump’s contention that it was Obama’s withdrawal from Iraq that created the space for ISIS to grow there.

Clinton’s admission, which was correct, is a startling reversal from 2012, when President Obama made ending the war in Iraq a cornerstone of his re-election campaign. Republican nominee Mitt Romney, at the last debate that year, tried to point out that President Obama had actually at the start of his term tried to renegotiate Bush’s status of forces agreement with the Iraqi government to keep thousands of U.S. troops in Iraq past the withdrawal date, but Obama persisted in denying it. By 2014, when ISIS began to become a substantial destabilizing force in an Iraq with an already ineffective, corrupt government, President Obama changed his tune, blaming Bush for negotiating the status of forces agreement that governed the total U.S. withdrawal from Iraq and insisting he had tried to keep thousands of U.S. troops in Iraq past the withdrawal debate. This presidential election season, the talking points have made a complete reversal, with Hillary Clinton, this year’s Democratic nominee, assigning credit (or blame, as it’s become in mainstream politics today) for ending the war in Iraq on George W. Bush.

What difference, at this point, does it make? Not much. Obama eked out a victory in 2012 by repeating the talking point about having ended the war in Iraq (false) and bringing the Afghanistan war to a responsible end (it is in its 15th year with no sign of ending anytime soon), and the U.S. returned to Iraq in 2014 for an anti-ISIS campaign that continues, rudderless but persistent, to this day. The two major candidates argued about who had the better rhetoric on wiping ISIS out, but neither questioned the premise of interventionism itself. Without a third-party candidate on the debate stage, there won’t be a conversation on the wisdom of U.S. interventions that have almost uniformly led to destabilization, from Libya to Afghanistan, both places where ISIS now also operates thanks to those U.S. interventions.