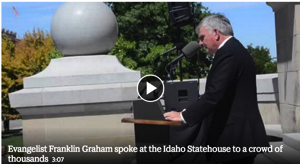 Evangelist Franklin Graham visited Boise Wednesday as part of a nationwide tour to call on Christians to vote and pray for America, according to a press release from Graham’s organization.

Thousands packed the steps of the Idaho Statehouse and Capitol Park to watch Graham speak.

Graham had been an advocate for Boise resident Saeed Abedini who was held in an Iranian prison for more than three years for espousing Christianity in the country. Abedini was released in January with four other Americans as part of an agreement between the U.S. and Iran.

Graham did not give any candidates or legislation an endorsement, but he urged Christians to vote in line with their religious values, and to vote the down ballot. He said that some Christians may need to “hold” their “noses” when choosing a presidential candidate, but that they ought to vote regardless, and consider electing the candidate who would nominate Supreme Court justices that would abide by evangelical values.

He also criticized secularism being part of U.S. culture and government. He said Christians became too lax after the Cold War.

Via the Idaho Statesman