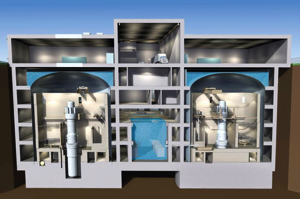 Note: these reactors output one-tenth the power that a nuclear aircraft carrier does. These are small reactors.

A Utah energy cooperative has selected a site to build a small commercial nuclear reactor in eastern Idaho.

Oregon-based NuScale Power would build the small modular reactors that can individually produce 50 megawatts. Additional reactors could be built as power demands grow, with up to 12 reactors producing 600 megawatts.

Experts say the reactors are designed to be safer than conventional nuclear plants by being able to shut down without human involvement in the event of a disaster.

Officials say the first reactor could be running by 2024.