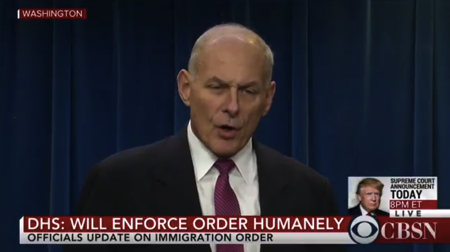 He began by clarifying that the order is “not a travel ban” nor a “ban on Muslims,” but a “temporary pause” on the flow of refugees and visitors from terror-ridden countries as DHS reviews its current refugee and visa vetting procedures.

“This is not a travel ban,” said Kelly. “This is a temporary pause that allows us to better review the existing refugee and visa vetting system… This way we can ensure the system is doing what it is designed to do, which is protect the American people.”

“This is not, I repeat, not a ban on Muslims,” he went on, referring to the backlash and protests over the weekend that labeled the executive order as a religiously-based action. “The Homeland Security mission is to safeguard the American people, our homeland our values, and religious liberty is one of our most fundamental and treasured values.”

This is not a travel ban… it’s a temporary pause that allows us to better review the existing refugee & visa vetting,” DHS Sec. says https://t.co/MFPJQPnaet