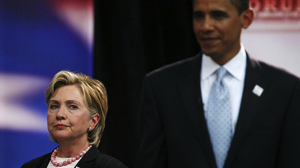 This week’s controversy over comments by Republican presidential nominee Donald Trump and the assassination of his Democratic rival Hillary Clinton by “second amendment people” echoes a flap during the 2008 primary when she mentioned the possibility of someone killing Barack Obama.

For those who don’t remember the events of eight years ago, the Illinois senator had all but locked down his historic nomination, but former first lady was holding on until June, refusing to concede.

She explained during a May 23 editorial board interview with the South Dakota newspaper The Argus Leader that “historically” it made “no sense” for her to drop and that she found it a “bit of a mystery” why so much pressure was being applied to her.

When pressed further, Clinton then raised the memory of Robert F Kennedy’s assassination, and the possibility of Obama getting murdered, as the reason why she was hanging on in there.

“My husband did not wrap up the nomination in 1992 until he won the California primary somewhere in the middle of June, right? We all remember Bobby Kennedy was assassinated in June in California. You know, I just don’t understand it and there’s lot of speculation about why it is,” Clinton said.

It was described by the New York Times as “one of the worst days” of her career, and the Obama campaign said the remarks were “unfortunate” and had “no place in this campaign.”

Clinton later apologized for the remarks, stating that she had been misconstrued and that her point was that there have been “nomination primary contests that go into June. That’s a historic fact.”

Now, Trump has been accused of making similar assassination remarks, which the Clinton campaign described as “dangerous.”

“A person seeking to be President of the United States should not suggest violence in any way,” said her campaign manager Robby Mook.

Clinton’s running mate Tim Kaine also said on Tuesday, following Trump’s remarks, that “nobody who is seeking the presidency should do anything to countenance violence.”

Like Clinton, Trump says he was misunderstood and the mainstream media is misleading people over what he said.

He claims it’s part of a bid to “distract” from her stance against the second amendment of the US constitution, which states, “A well regulated Militia, being necessary to the security of a free State, the right of the people to keep and bear Arms shall not be infringed.”