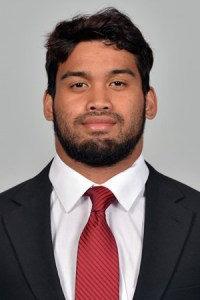 A star senior defensive back for the Washington State University football team was arrested early Wednesday morning for felony assault for allegedly breaking a man’s nose. The alleged altercation occurred at the Domino’s Pizza on Pullman’s College Hill around 1:30. Pullman Police say 22 year old Shalom Luani became verbally abusive in the packed pizzeria because his order was taking too long. The manager reportedly told Luani that he could have his money back but he continued to act disorderly. Several people asked him to leave including a 20 year old WSU student who was allegedly struck by Luani. At that point the men went outside the Domino’s when Luani allegedly punched the man breaking his nose. The victim went by private vehicle to Pullman Regional Hospital for treatment. When Pullman Police arrived they found Luani on scene who was cooperative with officers. He was arrested and then released for felony second degree assault. Officers say alcohol was involved. The American Samoa native played in all 13 games last season at safety for the Cougars earning All-Pac12 Conference Honorable Mention. WSU football coaches do not comment about off the field incidents allegedly involving their players and consider these cases a “team matter”.