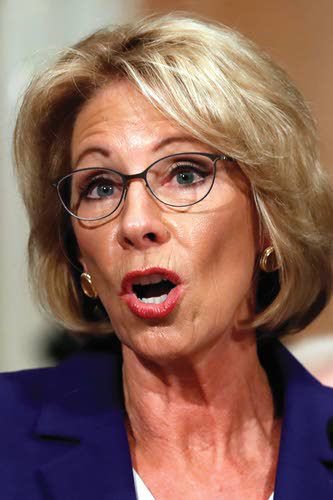 Donald Trump’s nomination of school choice advocate Betsy DeVos as education secretary appeared in jeopardy Wednesday, with two Republican senators saying they will vote against her.

Amid fierce criticism from Democrats and teachers unions, Sen. Susan Collins of Maine and Sen. Lisa Murkowski of Alaska announced their opposition to DeVos because of her lack of experience in the nation’s public schools. If she loses the support of one more Republican – and all Democrats vote against her – the nomination dies.

Murkowski said she believed DeVos, a billionaire Republican donor and promoter of charter schools, has much to learn about public education.

“I have serious concerns about a nominee to be secretary of education who has been so involved on one side of the equation, so immersed in the push for vouchers that she may be unaware of what actually is successful within the public schools and also what is broken and how to fix them.”