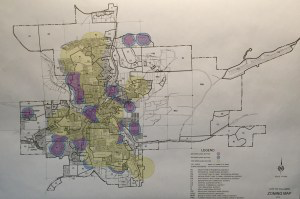 Pullman City Council resisted the discussion of legal marijuana shops in Pullman at last nights council meeting. In July, city council agreed the buffer limit should settle at 500 feet from libraries, schools, recreation centers, playgrounds, day cares, and transit centers. Washington State set the buffer at 1,000 feet when the law was initially passed, backing down to 100 feet in recent legislation – allowing cities to adopt the change for it to take effect. Pullman city council agreed the buffer at 500 feet was a comfortable median and made the code amendments last night. Also at last nights meeting, a map of these new buffers was presented, and the conversation continued, also highlighting the possibility of another shop should the moratorium be lifted. Pullman currently has three marijuana shops, if the moratorium was lifted they could have up to five per the state allocation. City council will revisit this conversation in September.