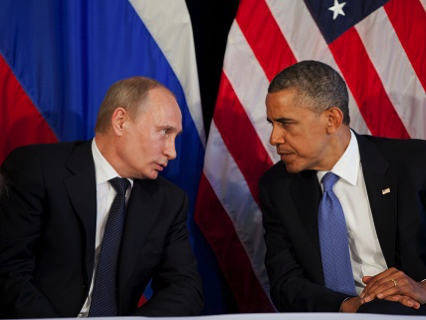 Russia’s GDP is less than that of Italy. Obama is admitting that the US cannot protect itself from the digital attack by a Second World nation? That’s encouraging.

This is worth reading in its entirety.

With just three weeks left in office, President Obama announced a series of measures, including limited sanctions and the expulsion of Russian intelligence operatives from the country, that the U.S. would take against Russia in response to its alleged hand behind the hacking of the Democratic National Committee (DNC) and Hillary Clinton campaign chair John Podesta.

Obama imposed sanctions on a number of individuals and two intelligence agencies, the FSB and the GRU, as well as companies accused of aiding in hacking. House Speaker Paul Ryan called the sanctions long overdue. The president also amended an executive order from 2015 (EO #13964) concerning the executive branch’s authority to deal with cyberattacks and hacks aimed at the “critical infrastructure sector,” distributed denial-of-service attacks, and corporate and financial espionage. Obama has added a fourth condition under which the U.S. government has authority to respond to cyberattacks: When they “tamper with, alter, or cause a misappropriation of information with the purpose or effect of interfering with or undermining election processes or institutions.” That expansion should deeply trouble us all, especially since the federal government has not shown why it ought to be trusted to be responsible for the cybersecurity needs of non-governmental agencies.

Along with the measures, the administration released a report (PDF) from the FBI and Department of Homeland Security (DHS) purporting to prove Russia’s role in the hackings. The document does not explicitly refer to Podesta nor the DNC, instead it refers to a “U.S. political party.” Most of the document is not about the election-related hacks but rather a laundry list of preventative measures network administrators can take.

The FBI and DHS joint report does explain how the DNC was hacked but offers little new information about that. In more technical language, the document explains that hackers sent out a thousand phishing emails, looking for someone to click on an attachment and thus provide them access into the targeted system via malware. We know from New York Times reporting that John Podesta’s emails were compromised in just such a way.

Similarly, the report doesn’t even really pretend to document that the Russian government was directly involved in the hackings; rather than offering independent verification, it asks readers to rely yet one more time on the FBI and DHS, two agencies that have done little to inspire full confidence among Americans. As former George W. Bush campaign heavyweight and ABC News’ chief political analyst, Matthew Dowd, put it on Twitter: “Lets be clear: U aren’t an American patriot & don’t respect Constitution if u believe Putin more than our President and intelligent services.” Perhaps believing the president is in Article 12 of the Constitution? You don’t have to be an America hater to distrust the president or intelligence services. The United States was, for example, sure that North Korea was behind the hacking of Sony, and then decided it wasn’t. The machinations of the intelligence community are notoriously lacking in transparency, making a substantive evaluation of its claims exceedingly difficult.

The administration argues that the hacks of the DNC and Podesta were “intended to influence the election, erode faith in U.S. democratic institutions, sow doubt about the integrity of our electoral process, and undermine confidence in the institutions of the U.S. government,” but it does not explain how. None of the emails released by Wikileaks from the DNC or Podesta’s email account have been challenged as forgeries or faked. Insofar as the emails from the DNC illustrated that Democratic Party bigwigs were in fact skewing the primary process to benefit their favored candidate, Hillary Clinton, over Bernie Sanders, any loss of faith in the DNC ought to be blamed on the DNC and not on whoever might have hacked their emails or released them to Wikileaks. (Wikileaks, for its part, has denied receiving the email batches from Russian sources.) Those revelations combined with worries in the Sanders camp about how much the legacy media was in the tank for Clinton, with the larger result that many Americans had less faith in the DNC (and its former chairperson Debbie Wasserman-Schultz) and major newspapers and news channels. But none of the emails themselves suggested anything untoward about the actual voting process—no illegal tampering with voting machines or voter rolls or anything of the kind.

If we’re being honest (rather than purely partisan), the administration’s slow-moving and cryptic responses to the alleged Russian hacking has itself sowed doubt “about the integrity of our electoral process” and undermined “confidence in the institutions of U.S. government.” Within recent memory, we’ve been treated to revelations that Obama kept an unconstitutional “secret kill list,” and that major intelligence bosses have lied under oath; whatever else you might say about the way that director James Comey handled the FBI’s investigation of Clinton’s private server during the election, you can’t say it made you feel more sure about an outfit with a decades-long reputation for spin and outright deception.

The president says in the coming weeks, the administration will release more reports on the history of election-related interference, including cases from previous election cycles. That the Obama administration waited until its last month in office to make these disclosures certainly works to undermine confidence. The context-free coverage of “election hacks,” meanwhile, makes it seem like something more than the hacking of emails happened this election cycle. A remarkable 50 percent of Hillary Clinton voters said in a recent YouGov poll that they believed Russia had tampered with vote tallies to help Trump. President Obama has specifically denied such claims, yet the imprecise language used by government officials and reporters has helped to, in the words of the administration, “sow doubt about the integrity of our electoral process.”

While citing election-related crimes, the Obama administration also lodged other complaints about Russia—namely that U.S. diplomatic officials in Russia were being harassed by police and security services. But the entirety of the claim about hacking appears to involve only the DNC and John Podesta emails. Those emails were not forged. Rather than respond to the hack transparently, the DNC and Podesta attempted to shift the discussion to the source of the leaks. But the source of the leak is irrelevant to the content of the leak.

Indeed, it’s hard to look at the freakout over who might be responsible for leaks that provided voters with useful information about the way their political leaders operate and not wonder if it’s being done to delegitimize unwanted results (remember how outraged everyone was when Donald Trump refused to proactively abide by the results of the election?). Wikileaks has long been the target of a campaign to delegitimize it as a source. At The Intercept, Glenn Greenwald notes how a recent interview with Julian Assange was misleadingly summarized by The Guardian in an article that went viral and spread “false news” about Assange across the world. The Guardian claimed that Assange said there was no need for a Wikileaks in Russia because the country had a free and open press, an obviously false statement. Instead, in the actual interview, Assange talked about the problems of penetrating Russian sources because his organization doesn’t have Russian speakers on staff and other reasons.

In the interview, Assange dismissed the idea that Wikileaks was trying to help Trump by releasing the DNC and Podesta emails. “What is the allegation here exactly?” Assange asked. “We published what the Democratic National Committee, John Podesta, Hillary Clinton’s campaign manager, and Hillary Clinton herself were saying about their own campaign, which the American people read and were very interested to read, and assessed the elements and characters, and then they made a decision. That decision was based on Hillary Clinton’s own words, her campaign manager’s own words. That’s democracy.”

Russia said it would not retaliate by expelling U.S. diplomats from Russia or imposing sanctions of their own. Instead, Russia President Vladimir Putin invited the children of American diplomats to the annual children’s Christmas party at the Kremlin. Trump praised Putin’s decision to “delay,” tweeting that he knew Putin was “very smart.” You don’t have to believe that Putin is “very smart,” or even a decent human being to continue to question Obama administration’s claims about Russia “hacking” the election. And you certainly don’t have to be as disturbingly incurious as Donald Trump seems to be about Russian intelligence operations—he’s said it’s “time to move on to bigger and better things,” an unthinkable response from him if the country in question was, say, China. No, you only have to have lived in the United States for any length of time, especially in the 21st century, when government officials have been caught redhanded lying to the public and Barack Obama has failed to deliver on his promise to run the “most transparent administration ever.” This is the man, after all, who has been called “the greatest enemy of press freedom in a generation” by legendary journalist James Risen. It will take more than a few reports and press statements to regain the confidence of Americans. Indeed, it might even take the kind of transparency and sharing of information that he once promised to deliver.