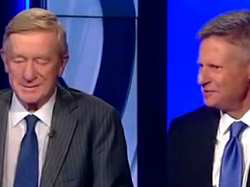 It was refreshing to moderate a “town hall” with the Libertarian presidential and vice presidential candidates last week because Govs. Gary Johnson and William Weld respect limits on presidential power.

Sunday, when Fox’s Chris Wallace challenged Johnson’s plan to replace the IRS with a consumption tax, Johnson pointed out that he’s “not getting elected dictator or king.”

Wallace suggested that means, “Don’t take my policies seriously because they won’t get through.”

It means that Johnson understands that America is a constitutional republic and there are (and ought to be) checks on what presidents can do.