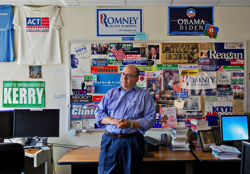 Who would have thought that Utah could go for Hillary!

Donald Trump has vowed to turn blue states red in November, but as he continues to rattle Republicans with his combative style and provocative proposals, voters in some of the country’s most conservative strongholds are considering a radical idea: supporting Hillary Clinton.

The dilemma posed by this year’s choice of candidates is perhaps most apparent here in Utah, the mountain state that has not backed a Democrat for president since Lyndon B. Johnson in 1964. More than 50 years later, a large Mormon population with a strong distaste for Trump has left the state up for grabs, and with a substantial Mormon presence spilling into places such as Arizona, Idaho and Nevada, what would normally be a Republican safe zone could be surprisingly competitive.

With the Clinton campaign looking to put Republican-leaning states in play, the decision for many Mormon voters in Utah has become agonizing as they digest Trump’s stances toward Muslims in light of their own history as an oft-maligned religion, and as his “America First” message repels well-educated Mormons who travel the world on missions and who welcome refugees.

“People who normally vote Republican are in a terrible state of ambivalence right now,” said Tim Chambless, a political scientist at the University of Utah. “They are so undecided. They want to vote, but they aren’t sure how to vote.”

The first signs of Trump’s troubles in Utah date to early March, when Mitt Romney, the 2012 Republican presidential nominee and a Mormon who is beloved in the state, gave a speech here warning that Americans were being duped by Trump. Later that month, Trump was throttled by Sen. Ted Cruz in the state’s caucuses, winning a paltry 14 percent of the vote. In June, two polls showed Trump and Clinton deadlocked in Utah, making it increasingly plausible that its six electoral votes are really in play.

With three months until the election, the Clinton campaign is now considering a possible upset in Utah, Libertarian candidate Gary Johnson is aggressively wooing disenchanted Republicans, and on Monday word came that Evan McMullin, a Mormon who is a former CIA official opposed to Trump, was also entering the race.