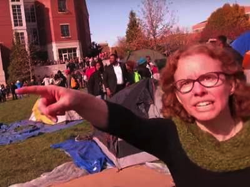 She must be someone real special to someone. Communication Professors are a dime a dozen. For her to get her job back after what she did…

Gonzaga University must be a forgiving place. Melissa Click, the former University of Missouri communications professor who was fired after assaulting a student-journalist during a campus protest, has been hired by the Catholic college.

In a statement, Gonzaga acknowledged the controversy surrounding Click but expressed confidence that she has “learned much from her experiences” at Mizzou.

“Dr. Click was hired through an extensive national search process that revealed her to be the most qualified and experienced candidate for the position,” said the university, according to The Kansas City Star. “Dr. Click has excellent recommendations for both her teaching and scholarship, which includes an extensive record of publication. We are confident she has learned much from her experiences at the University of Missouri and believe she will uphold the rigorous standards of academic excellence demanded of Gonzaga faculty and students.”

To recap: Click was caught on camera trying to persuade participants at a public protest to forcefully eject a student-journalist who was covering the event. She was charged with a misdemeanor and eventually fired.

It’s difficult to tell whether she is genuinely sorry for her actions. In subsequent interviews, Click has come off as completely clueless. She also suffers from an inflated sense of self-worth. “I’m not a superhero,” she told The Chronicle of Higher Education.

I don’t really think Click’s life should be ruined over one ill-considered moment, and Gonzaga is free to employ her if it wants to. But I’d prefer to see some actual contrition from Click first. How can it possibly be the case that she is currently the most qualified person to teach communications (of all things), when she doesn’t even seem capable of learning from her own mistakes?