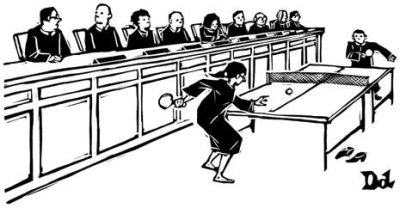 The Democrats are in a tough spot. The seat that is open is the Scalia seat, meaning that a Gorsuch confirmation will simply maintain the status quo. If the Democrats filibuster on this one, where Gorsuch is so obviously qualified and so obviously not an orc, the Republicans can then go nuclear, adjusting the filibuster rules downward, and do so with a respectable amount of cover—thoughtfully provided to them by the Democrats. The real pitched battle, from the perspective of the Left, will have to be over the next Supreme Court appointment, not over this one. If they do what their base is demanding, which is to filibuster now, they might find themselves in a pickle in a few months when another seat opens up on the court and Trump nominates Henry P. Balrog.

Should the Republicans be willing to go nuclear? The answer is of course. This would mean that the vote margin required to confirm a nominee is adjusted from 60 to 51. This trail was blazed by Harry Reid, who did this for all cabinet appointees, thus making way for Trump’s cabinet to be the most conservative in several generations. Not only that, but it granted tacit permission to the Republicans to do the same thing as it applies to the Supreme Court. This really is a marvelous time to be alive.

In addition to the tactical set up being in favor of the Republicans, so is the atmosphere. By this I mean that I believe the kind of vicious smear campaign that worked on Robert Bork would not really be possible today. (Although it will certainly be tried.) The country has apparently reached its saturation point when it comes to leftist outrage fatigue.

Whether deliberately or not, whether it is instinctive or thought out, Donald Trump is doing to the domestic left what Ronald Reagan did to the former Soviet Union. What I mean is this. Reagan spent the Soviets into the ground. They could not keep up, and finally collapsed, exhausted. We were far wealthier than they were, and we leveraged our wealth to the point where they simply tapped out.

Trump has apparently grasped that the capital that the left uses is emotional capital, and he is making them spend it all. Every three days they have to write another yuge check.

We have been scouting Team Snowflake for a while, but apparently we should have been asking more questions about how deep a bench they had. Do conservatives, if in power, have more capacity to outrage them than they have outrage to be outraged with? I think we are about to find out. If the left tries to spend the next six months lying on its back on the floor, drumming with their heels, they might find out.