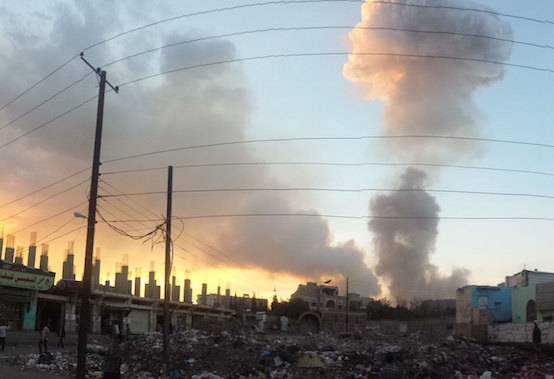 General Flynn believes that Iran is the center of a global anti-American alliance. Flynn also believes that the Houthi in Yemen are an Iranian proxy force. This could mean more war in Yemen as he is Trump’s National Security Advisor.

This will make the Republicans happy.

And maybe the Democrats will decide that they don’t like war any more after 8 years of allowing Obama to kill indiscriminately.

Michael Horton sees the war on Yemen as a litmus test for the Trump administration:

What President-elect Trump does—or doesn’t—do about the war in Yemen will tell us a great deal about what his foreign policy in the Middle East may look like. It will also tell us which set of advisors he is most inclined to listen to: pragmatists, like incoming National Security Advisor retired Lt. General Mike Flynn, who prioritize the fight against militant Salafism, or neoconservatives who see Iranian influence as the primary threat to regional stability.

I agree that Trump’s approach to the U.S.-backed war there will tell us something important about his foreign policy, but I’m not sure how Flynn qualifies as a “pragmatist” especially when it comes to Iran. Flynn claims to believe that the U.S. is engaged in a global war against “a working coalition that extends from North Korea and China to Russia, Iran, Syria, Cuba, Bolivia, Venezuela, and Nicaragua.” He and co-author Michael Ledeen go on to say that “Iran is the linchpin of the alliance, its centerpiece.” If we take Flynn to mean what he and Ledeen say here, how can we see him as a “pragmatist” in opposition to anti-Iranian hard-liners? For that matter, why would a “pragmatist” write a book with such a fanatical hard-liner and Iran hawk like Ledeen in the first place? For his part, Ledeen wrongly and predictably treats the Houthis as nothing more than an extension of Iran. Why would we think that Flynn disagrees with his co-author on this? I keep coming back to Ledeen and Flynn’s book because we have the next president’s top adviser publicly giving us the outline of his worldview at length, but it doesn’t seem to receive much attention.

If we don’t take his book as a reliable source of his views, we still have Flynn’s own testimony before Congress in which he makes clear his hostility towards Iran and states his opinion that they are responsible for stoking the conflict in Yemen. Since Flynn exaggerates the threat from Iran and imagines a global Iran-centered “alliance” where none exists, it is unlikely that he accepts the reality that Iran’s role in Yemen has been and remains negligible. The only thing Trump has said about the war to date confirms that he shares the erroneous view promoted by the Saudis that Iran was and is seeking to take over Yemen: