For years, skeptical scientists have been pointing at data that showed the the world started warming somewhere from 1700 – 1820. This has been known from glaciers, sea level studies, ice cores, boreholes, ocean heat content estimates, and more proxies than any climate-nerd cares to name.

Finally, expert climate modelers are “surprised” to discover this:

“…their study had detected warming in the Arctic and tropical oceans from around the 1830s, just 80 years after the Industrial Revolution started in England. “It was an extraordinary finding,” she said. “It was one of those moments where science really surprised us. But the results were clear. The climate warming we are witnessing today started about 180 years ago.”

How many grant dollars did it take to figure out what skeptical scientists have been saying for years?

The correlation with global temperatures and actual numerical human emissions is abysmal, so now Abrams et al ignore the numbers and appear to suggest that “The Industrial Revolution” itself started the warming — as if the mere invention of the steam engine heated the world.

[Dr Abram] said the study attributed the gradual warming to an increase in greenhouse gas emissions linked to the move from an agricultural to industrialised society.

“The climate system did respond quite quickly to industrialisation …. it was a small response, but it’s a measurable one.”

Global warming started 200 years ago, but human emissions of CO2 were bugger-all-of-nothing until after World War II. Humans have put out nearly 90% of all our CO2 molecules ever since the War started. We’ve put out 30% of all our emissions ever since the year 2000. The message hammered home over and over, is that temperatures don’t correlate at all well with our CO2 emissions and never have. 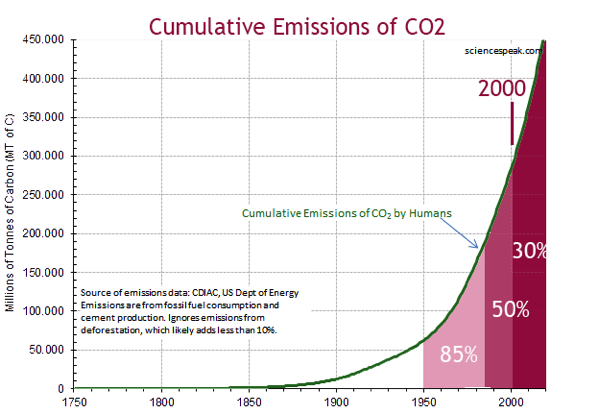