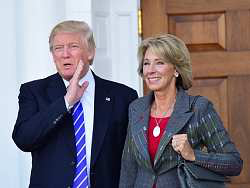 There’s a lot to worry about in the coming presidency of Donald Trump, but a few bright spots appear for those of us who want to run our own lives with minimal government interference. In particular, the naming of Betsy DeVos as the president-elect’s pick for Secretary of Education holds a lot of promise for parents who want to move past decades of crappy politician-directed schooling to gain more say in how their children learn.

To go by her enemies, DeVos offers promise, indeed.

DeVos is “best known for her anti-public education campaigns” the National Education Association fulminates in its official response to her nomination. The NEA goes on to take her to task for supporting “vouchers—which take away funding and local control from our public schools—to fund private schools at taxpayers’ expense.”