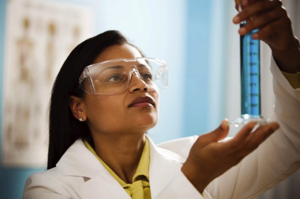 The fact that higher education has completely confused the ideas of education verses training has lead to where we are today: degrees in welding and underwater basketweaving.

Dr. Loretta Jackson-Hayes is an associate professor of chemistry at Rhodes College in Memphis. This is an excellent article. I commend all of it to you.

In business and at every level of government, we hear how important it is to graduate more students majoring in science, technology, engineering and math, as our nation’s competitiveness depends on it. The Obama administration has set a goal of increasing STEM graduates by one million by 2022, and the “desperate need” for more STEM students makes regular headlines. The emphasis on bolstering STEM participation comes in tandem with bleak news about the liberal arts — bad job prospects, programs being cut, too many humanities majors.

As a chemist, I agree that remaining competitive in the sciences is a critical issue. But as an instructor, I also think that if American STEM grads are going lead the world in innovation, then their science education cannot be divorced from the liberal arts.

Our culture has drawn an artificial line between art and science, one that did not exist for innovators like Leonardo da Vinci and Steve Jobs. Leonardo’s curiosity and passion for painting, writing, engineering and biology helped him triumph in both art and science; his study of anatomy and dissections of corpses enabled his incredible drawings of the human figure. When introducing the iPad 2, Jobs, who dropped out of college but continued to audit calligraphy classes, declared: “It’s in Apple’s DNA that technology alone is not enough — it’s technology married with liberal arts, married with the humanities, that yields us the result that makes our heart sing.” (Indeed, one of Apple’s scientists, Steve Perlman, was inspired to invent the QuickTime multimedia program by an episode of “Star Trek.”)

Carly Fiorina, former CEO of Hewlett-Packard, credits her degree in philosophy and medieval history in helping her be the first woman to lead a high-tech Fortune 20 corporation. “If you go into a setting and everybody thinks alike, it’s easy,” she has said. “But you will probably get the wrong answer.”

Read the rest of it over at the Washington Post.