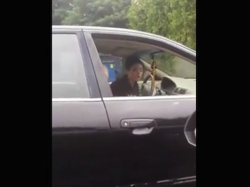 Can you imagine? Not waking a child up for a 3 minute shopping break! The horrors!

Here’s the video of a baby whose mom decided against dragging him into the gas station for a short errand. Instead she let wait in the car. This caused some modern day hero to whip out his cell phone, start videotaping, and swear about what a horrible mother she is. When she returned to the scene of the “crime,” he cursed her to her face. And since he made sure to videotape the mom’s license plate, now she is being investigated by the authorities. Charges are expected.

And of course his video, which he posted on Facebook, has gone viral (2.5 million views) and inspired “investigative” reporting: the reporter interviewed the young woman’s neighbors, as if the she was Son of Sam.

If this isn’t an example of what the University of California Irvine researchers recently discovered about our judgment of moms, I don’t know what is.

Their study found that we are overestimating the danger of unsupervised children because we believe no decent mom would EVER take her eyes off her kids. And once we have judged a mom as immoral, that judgment makes us unconsciously amp up the amount of danger we truly believe the child to be in: a feedback loop of self-righteousness. It’s an amazing study. Read about it here.

But the problem we must deal with is this: People not only judge parents—they get off on hating them. It gives them a moral high.

This is what Theodore Dalrymple describes as “toxic sentimentality.” That’s when people believe that they are so tenderhearted, they are morally superior to anyone who is not excessively outraged by any perceived danger, especially to a child. And that allows them to get out the pitchforks. They get two thrills for the price of one: Despising a person they deem morally inferior, and feeling morally superior for that hate.