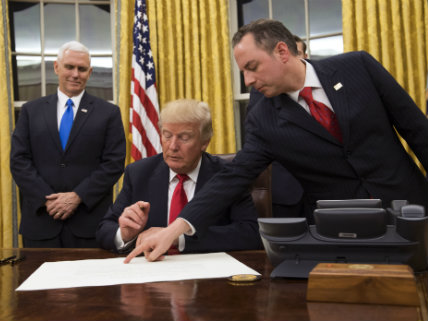 More irony. The Dems are reaping what they sowed.

Just hours after taking the oath of office last Friday, President Trump signed an executive order instructing federal agencies to provide relief from Obamacare to both individuals and states. The vaguely worded rule offers only hints as to how the Trump administration might unwind the federal health care law. But it provides the first real clue to how Trump will govern—by wielding the expanded executive branch powers that President Obama relied on while in office.

The order itself looks as much like first day symbolism as a direct strike at the heart of the law. When Trump’s Press Secretary Sean Spicer announced it on Friday, he said only that agencies would be directed to “ease the burden” of the law, and did not provide any specific actions that the administration might take. The actual text is not much more clear: It does not identify any rules or regulations that the administration should alter or eliminate, but instead directs agencies to use their discretion and authority to “waive, defer, grant exemptions from, or delay the implementation of any provision or requirement” under Obamacare that imposes a burden on states, families, individuals, insurers, or others in the health care arena.

In other words, it is an order that does not tell agencies what to do. Instead, it tells them to figure out something to do.

The vagueness of the order means it could result in very little, and that it essentially serves as a toothless statement of the Trump administration’s opposition to the law.

But it is also possible, and even likely, that it could be interpreted in a way that gives agencies quite a lot of flexibility to upend Obamacare’s implementation—in part because of the dubious way that the Obama administration chose to implement the law.

For example, it could be used to gives states more flexibility to implement the law’s Medicaid expansion. Indiana and several other states are already participating under a waiver negotiated with the federal government, and this order, which explicitly mentions providing relief to states, could result in an even more leniency in terms of Medicaid carve outs.

It’s also possible that it could be used to weaken, and perhaps effectively eliminate, the law’s individual mandate, as well as its essential health benefits.

The Obama administration has always offered an array of exemptions from the individual mandate, including a broad and nebulous “hardship exemption,” which at least in theory allowed for the administration to waive the tax penalty associated with the mandate for just about anyone. Now that the Trump administration is in charge of drawing up regulations governing the enforcement of the mandate, it is possible that the hardship exemption, or something like it, could be expanded to effectively cover everyone.

Indeed, Kellyanne Conway, a senior Trump adviser, has already raised the possibility of declining to enforce the mandate. That’s far from a promise, of course, and given Trump’s history of vagueness and flip-flopping on health care, it’s not at all certain that this is the approach the new administration will take. But it is within the realm of possibility.

If that were to happen, it’s reasonably likely that health insurance carriers, already on edge about Obamacare, could simply pull out of the program, decimating the marketplace in the process. The big insurers are losing money in the exchanges set up under the law, and most have already scaled back their participation. If the Trump administration takes steps to undermine the mandate—which insurers have repeatedly asked to be strengthened—few would have much reason to continue offering coverage in the exchanges.

A mass exit of insurers from the exchanges would leave millions suddenly uninsured, creating exactly the sort of health coverage chaos that the Trump and his advisers have repeatedly promised to avoid. Republicans could blame the Obama administration, arguing, as they already have, that the foundations of the law were weak and that it was doomed anyway. But Trump himself would have been the one to take a wrecking ball to its structure, and thus would almost certainly have to absorb most of the political fallout.

In theory, this would all be done through a slow and deliberative process. The order instructs agencies to follow the Administrative Procedures Act, which means going through the lengthy federal rulemaking process, which can take months in the fastest of circumstances.

The Trump administration, then, could use the precedent set by the illegal actions the Obama administration took to prop up Obamacare to take the law down—turning the previous administration’s expansive claims of executive authority against its signature initiative.

This was always the risk of the Obama administration’s repeated decisions to short circuit the traditional regulatory process in order to keep the health law from falling apart—and the more astute supporters of the law recognized this. Trump can’t repeal Obamacare from the White House, but he can take a sledgehammer to its foundations. Because Obamacare was held together with ad hoc executive orders, often issued under political pressure, it could be undone with the same. Essentially, as Politico’s Dan Diamond writes, the new administration could be use Obamacare to kill Obamacare.

But this is all a big if. Given Trump’s history of confusion on health policy, and his stated desire to avoid the sort of insurance market disarray that an executive branch strategy would cause, it is just as plausible that Trump’s executive order results in few if any meaningful changes to Obamacare, at least in the short term. Indeed, this could even be a way of signaling that he expects his administration to keep Obamacare alive and afloat while Congress tries to move forward on the repeal process. Notably, it instructs agencies to provide relief to insurers as well. The order is simply too open-ended to draw any definitive conclusions about what it means for the law.

It does, however, provide a clue as to how Trump is likely to govern: by aggressively leveraging the expanded executive powers left by President Obama, sometimes to undo Obama’s achievements, and sometimes to advance his own agenda, whatever that turns out to be.

Obama, frustrated by congressional gridlock and inaction, frequently resorted to the sort of aggressive administrative action that effectively amounted to executive branch lawmaking. This latest executive order is a strong signal that his successor will do the same.

In the end, this may end up as Obama’s most consequential legacy—not the policies he presided over, but the process by which they were put into place. Obama touted the power of the pen and phone, but now that power is Trump’s to wield.