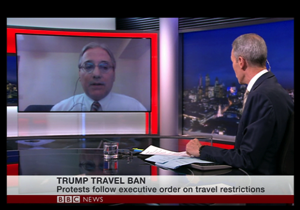 One issue not discussed before is the common assertion that neither 9/11 nor other terrorist attacks were from people entering the U.S. from those 7 countries. I explained why that’s not a legitimate attack on the Executive Order:

“Q. Just looking at the figures, in the past 40 years, you will know this, there’s not been a fatal terrorist attack in the U.S. carried out by anyone belonging to the 7 nationalities targeted by this Order. These measures wouldn’t have kept the 9/11 attackers out because Saudi Arabia, the UAE, Egypt, Lebanon, they’re not on the list ….

A. …. in terms of whether people from those countries have conducted past attacks, that’s not the point of the security measures that are taken in immigration, it’s meant to prevent foreign fighters in a new environment, one that didn’t exist 10 years ago, being infiltrated into the U.S. much as they’ve been infiltrated into Europe, and ISIS stated goal is to infiltrate people. That’s not something that existed several years ago. So I think it’s apples and oranges to say that just because no one from these countries has previously attacked that there isn’t a real threat. And if you’re saying that it’s bigotry by Donald Trump why would the Department of Homeland Security in 2006 [sic – 2016] when President Obama was in office, why would they have identified these 7 countries as representing unique threats to the nation?”