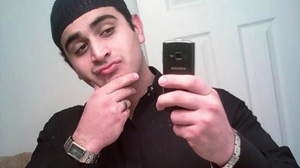 And, no, it had nothing to do with his being a closeted homosexual or his hate of gays.

More of Orlando shooter Omar Mateen’s negotiations with police have been released. The transcripts shed some light on Mateen’s motivations for the June 12 killing and injuring of more than 100 people at Pulse, an LGBT nightclub in Orlando, Florida.

In the months following the mass shooting, speculations over Mateen’s motivation have included everything from his sexuality to Islamic State (IS, formerly ISIS/ISIL) indoctrination.

Transcripts obtained by the Orlando Sentinel and two dozen other media organizations have offered some insight to Mateen’s mental state after he opened fire in the club.

Andy and Mateen would spend an hour on the phone, although much of that hour was Andy desperately trying to get Mateen to communicate with him. Mateen was not particularly receptive to negotiations, at one point telling Andy, “you’re annoying me with these phone calls and I don’t really appreciate it.”

When Mateen did talk, he focused his attention on airstrikes from the US and Russia on the Middle East, particularly Syria. When the negotiator asked, “can you tell me where you are right now so I can you get some help?” Mateen responded with, “no. Because you have to tell America to stop bombing Syria and Iraq.”

“They are killing a lot of innocent people,” he said without a hint of irony.

Mateen refused to identify himself during the phone call beyond introducing himself as Mateen to the operator. After that, he said, “My name is I Pledge of Allegiance to (unidentifiable name) of the Islamic State.”

When pressed for his real name, Mateen told Andy, “Call me Mujahedeen, call me the Soldier of God.” He told the negotiator that, because it was the last month of Ramadan, he had spent his day fasting and praying before coming to Pulse.

The transcripts did not offer much clarity about why he chose Pulse to make his stand against killing innocent people, but there were tidbits that showed his admiration for other terrorists in the US.

“My homeboy Tamerlan Tsarnaev did his thing on the Boston Marathon,” he said, referring to the 2013 attack, “my homeboy [unidentifiable name] did his thing, okay, so now it’s my turn, okay?”

If the call offers any insight to Mateen, he was very distraught about the airstrikes committed by the US and Russia in Syria.

“What am I to do here when my people are getting killed over there?” he asked. “What’s going on is that I feel the pain of the people getting killed in Syria and Iraq and all over the Muslim [unidentifiable word],” he said.

He also made strange threats, such as claiming that he had rigged bombs in cars that would take down an entire block and that he was wearing the kind of vest worn by terrorists in the suicide bombing attacks on Paris in 2015.

When pressed for details, he claimed “If you bring the bomb dog they are not going to smell s**t.”

For some reason, the inability of bomb sniffing dogs to smell his vest was a point of pride for him as he continued to rant, saying, “You can’t smell it. Bring your little American bomb dog, they are f***ing outdated anyway.”

But when probed about his vest, Mateen said it was not a bomb vest but “like, you know, to go out to a wedding.”