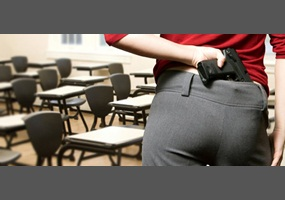 Some patrons are speaking out against a proposal they fear will require teachers to carry guns in the rural Mountain View School District.

But the board member who drafted the measure says arming all teachers would be “crazy.”

Mike Dominguez said the policy he’s introducing would merely mean the district – with schools in Grangeville, Kooskia and Elk City – would be ready “so that if it comes to the point that we need to arm teachers, we’ve got a policy in place and we can do so.”

The measure, which is scheduled for a first reading next month, reflects an Idaho statute that allows an employee to carry a gun in a school if authorized by the board.

It “would give the board the option to allow someone to be armed,” Superintendent Kent Stokes said.

That possibility has drawn several letters to the editor of the Idaho County Free Press, including from former Grangeville City Councilor Shelley Dumas.

“It seems like a quick-trigger solution to a possible problem,” Dumas said in a phone interview. “I’d rather that they would explore other avenues first.”

A draft version of the policy includes the statement that “the school board may, from time to time, authorize specific individuals to possess certain firearms or other equipment on school property, at school-sponsored or school-related events, and at board meetings.”

“I have sincere and serious doubts that the teachers favor this, from the two teachers that I’ve talked with,” Dumas said. “I think that their acceptance or permission is critical.”

Dominguez said he just wants the district to be prepared, “if we start seeing an increase in school violence in terms of terrorism or anything like that.”